A Guide to AHL Genres 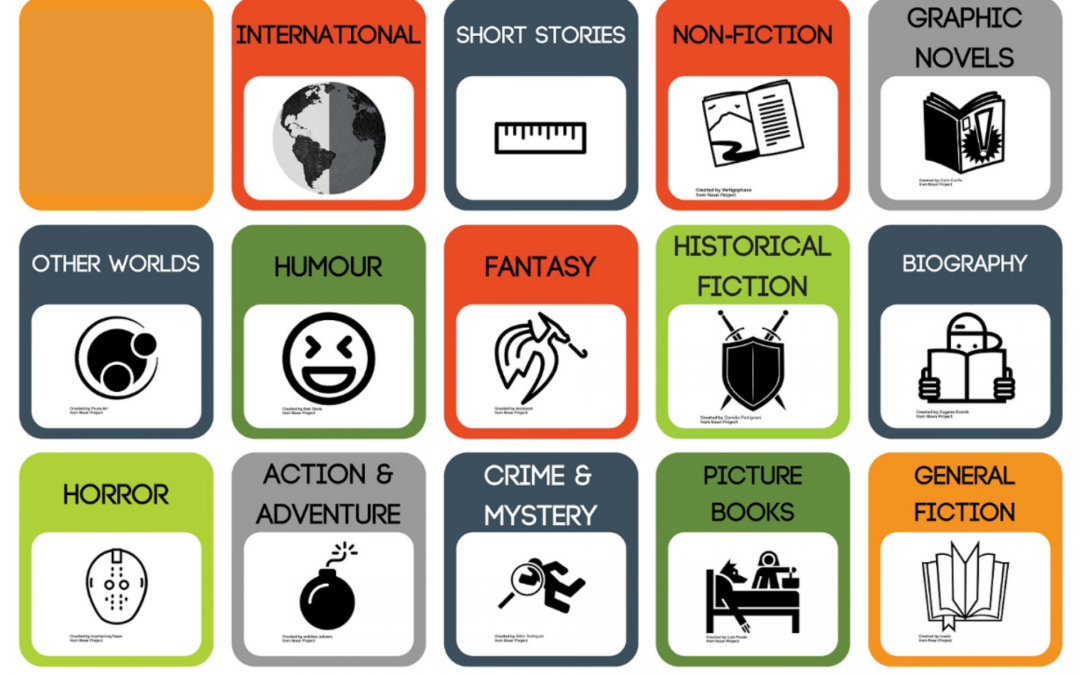 a style or category of art, music, or literature.

The Arthur Holt Library divides books into different sections to make books easier to find. Our main sections are Fiction & Non-Fiction. However, the Fiction section is divided into genres, similar to what you might find when you pursue your local bookshop.

This post will introduce you to all of the different genres you can find in the library (as well as tell you what kind of books you’ll find in each section. 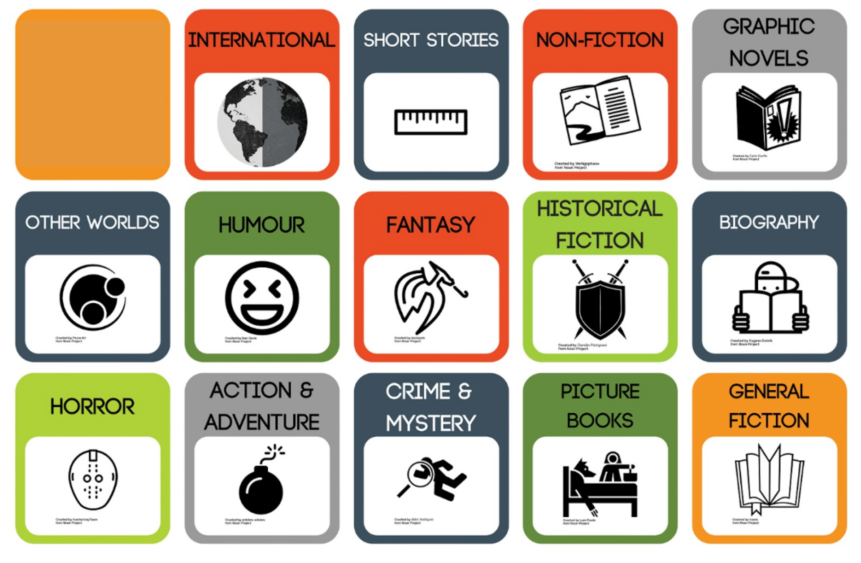 In this genre characters can always expect the worst; the characters can and usually do, have multiple life-threatening problems thrown at them; the plot is characterised by fast-paced action, weaponry and violence. Characters may include but are not limited to pirates, warriors and soldiers.

Books in this genre are labelled with an exploding bomb sticker (because all good action & adventure stories feature some kind of explosion! ) In this genre you will find books like Alex Rider by Anthony Horowitz and Bourne Identity by Robert Ludlum.

Crime & mystery features stories dealing with the solution of a secret, crime or puzzling situation OR a story that uses suspense to keep the reader engaged, may feature detectives or spies. They typically include; planning, execution, solving and aftermath of a crime and/or the search for clues and a resolution.

You can find this genre on the shelves by looking for the magnifying glass sticker! Books from crime & mystery include but are not limited to; The Girl on the Train by Paula Hawkins and Sherlock Holmes by Arthur Conan Doyle.

Books from this genre feature an untrue story that could never be real. They differ from science fiction novels because worlds, characters and stories do not have any scientific merit or link. Fantasy novels typically feature; magic, wizardry, dragons, unicorns, sorcery, talking animals etc.

General fiction includes stories of realism, classics & Literary works. This genre does not have a sticker, meaning that it will easily stand out amongst all the other genres!

Graphic novels are typically novelisations of comic book-style stories including extensive graphics. Stories can be originals for example Batman or Superman comics or adaptations like Great Expectations by Charles Dickens.

Manga refers to Japanese comic books, the series of which are often made into Japanese cartoons, or anime. Stories are always original and feature a variety of literary genres like fantasy, crime, horror, mystery etc.

Like general fiction, graphic novels and manga do not have a genre sticker! However they are easily identifiable thanks to library signage and their colourful covers! Books from this genre include but are not limit to; My Hero Academia and Hunter X Hunter.

This genre is marked by its sword and shield sticker and features stories such as The Boy in the Stripped Pyjamas by John Boyne and The Book Thief  by Markus Zusak.

Labelled with a scream mask sticker, books from this genre include Stephen King’s IT and R.L Stines’ Goosebumps series.

These are books that cause laughter and amusement! This genre also includes works of satirical and dark humour. Identifiable with their smiley face sticker, this genre features novels as Gangsta Grandma by David Walliams  and the Diary of a Wimpy Kid by Jeff Kinney.

As the name suggests, this genre holds books written in different languages.  Books are labelled with their country flag and includes a variety of books, including picture books, short stories and novels. Examples include Le Petit Prince by Antoine de Saint-Exupéry.

Also known as science fiction or speculative fiction. Books in other worlds feature an untrue story based on the impact of an actual, imagined or potential science. They are usually set on earth in an alternative future or on other planets. Includes subjects such as: space exploration, robots, medical experiments, genetic manipulation , time travel
and viruses /diseases.  These books are labelled with a purple planet sticker and feature books such as The Hunger Games by Suzan Collins.