An Inky Review! Turtles all the way down by John Green 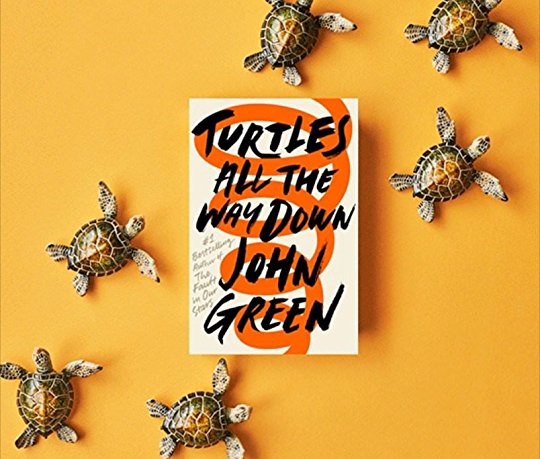 “The Inky Awards recognise high-quality young adult literature, with the long-list and shortlist selected by young adults, and the winners voted for online by the teen readers of InsideaDog.com.au. There are two awards: the Gold Inky Award for an Australian book, and the Silver Inky Award for an international book.” – Insideadog.com.au

Alexander Scott (12ST) was challenged by Miss Mileto to read and review one of the books nominated for the 2018 Inky Awards. The book she chose was “Turtles all the way down” by John Green, Alex shares his thoughts below.

Why do you think that this book has been chosen for the Inky Awards?

John Green’s Turtles All the Way Down is a well written story revolving around a teenage girl who struggles with her mental health, much like Green’s other novels. Green takes the time to describe the issues that the protagonist, Aza, deals with as she also struggles to deal with external factors. Green’s portrayal of Aza’s OCD and anxiety is realistic to an extent that the readers sympathise deeply with her, and his method of reflecting the effect that Aza had on her closest friend. All in all, Green has written a novel that illustrates the inner struggles of a teenage girl with a debilitating mental illness and the impact that her thoughts and actions have on others, and in particular highlights the need of tolerance, acceptance and support for the people who do suffer. He has successfully written a meaningful and relatable novel in an engaging manner that will aid to spread knowledge and encourage the acceptance and support

What moment in the book stood out to you the most (this could be a scene, a character etc.)

Aza’s decision to end her relationship with Davis due to her feeling that she was unable to maintain a ‘normal’ relationship. Aza was obviously interested in being in a relationship with Davis but due to her OCD and anxiety she thought it was in his best interest to not be in a relationship with her. A striking scene as it was Aza’s decision to end what seemed to be one of the only things that her happy and it came purely down to her internal struggles with her own mental stability. Similarly, when Aza first read Daisy’s fanfiction and realised that Daisy, her best friend, was using fanfiction as a venue to vent about how much of a burden Aza was. Both scenes detail times in which Aza’s struggle with her own mind has negatively impacted her real life and they are both upsetting and shocking scenes for first time readers.

Do you think this book should make the short list?  (why/why not)

Yes, as aforementioned Green constructed an engaging novel that spreads awareness of and advocates acceptance and support of mental illness, in particular in teenagers, who more often than not, are not well versed in symptoms of said mental illnesses. Many young adults believe that a mental illness is easily overcome through therapy and drug usage, and Green highlights that that is not the case. Green’s novels are widely read and he has fan base who listen to what he says and who pay attention to lessons he tries to convey through his novel, and so, his appealing mystery novel that sheds light on sensitive issues which are important for his demographic to learn about.