*It’s the Italian issue, so the librarycook is living la dolce vita this month.

Che bello! thought the librarycook, when the August issue of Delicious arrived.  The librarycook doesn’t do coffee, but even so the cover picture of the “ultimate espresso martini tiramisu” had her drooling.

Rifling through the issue, recipe after recipe caught her eye.  But it was two comparatively simple dishes that made the final cut : Spaghetti, garlic, olive oil & chilli with prawns; and Rosemary focaccia with chorizo and goat’s cheese.  And one molto delisioza Chocolate & hazelnut torta caprese crept into the mix as well – every good Italian meal needs dessert, after all.

First up was the spaghetti.  The librarycook has a similar, much-loved recipe for spaghetti with prawns, so she was interested to see if this would be better.  Sadly, it wasn’t.  The addition of butter in the final stage was just too much – prawns and olive oil are rich enough on their own, without needing anything else.  And alas, there was little or no reading time, as there sadly so rarely is when cooking pasta.

Next, the focaccia.  Now, it was good.  It’s been made twice in the last two weeks, and there are plans for a third version over the weekend.  Logistically,  a little challenging, seeing as the dough must be left to rise for at least 16 hours, so it’s not a last-minute option.  Once that’s done, though, the final stages are a matter of minutes, before the now-adorned-with-rosemary-goat’s cheese-and-chorizo focaccia is placed into the oven for 40 lovely minutes of reading time.  Not forgetting that 16 hours, either, although the librarycook does have to sleep sometime. 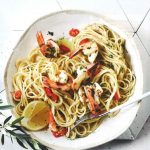 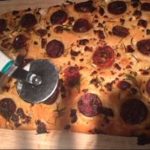 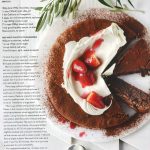 Last, but definitely not least, dessert.  The Chocolate & hazelnut torta caprese was fantastic.  Even under the quasi-medieval cooking conditions currently prevailing in the librarycook’s kitchen – the electric beater died recently, and is much missed (the librarycook’s Nanna-in-law’s 1950s hand-operated Swift Whip beater is just not the same) – the cake came together easily.  And with 40 minutes or so in the oven, plenty of time to finish Sally Rooney’s Normal People.

And an extra point in its favour – it’s flourless, which in these allergenic times is well worth noting.