When the much anticipated December-January issue of Delicious arrived, the librarycook was faced with a dilemma.  The issue positively bulged with scrumptious this and delectable that.  But there was a problem.  Most of the “Bumper Christmas Issue” recipes were aimed at the Christmas cook.  Or, at the very least, at those planning a summer of entertaining.  Which the librarycook, at least in her imagination, is not.  What she is planning is a summer of reading.  And she’s not ready to face the reality of the invasion of the family hordes to celebrate the festive season, let alone the inevitability of the “why don’t you come over for lunch” multitudes who inhabit January.

It’s not as if the librarycook is going to test a recipe for, say, honey-glazed ham with parsley and praline crust, or Beef rib roast, mushrooms, red onion and horseradish jam, just to add to the librarycook’s blogging output.  Let alone the cover recipe for Mango and watermelon trifle, spectacular though it looks.  The librarycook is dedicated to her art, but not to the extent of pre-cooking Christmas lunch for the vicarious enjoyment of blog readers.

But what was she to do?  Blogposts don’t write themselves after all.  And then the magazine fell open on the gingerbread article.  Perfect, she thought.  Easy, charming, long-lasting, and perfect for those early December events that require a small gift.

The recipes, or at least the construction instructions, included gingerbread people, houses, a Christmas tree, and, most astonishing of all, an Advent calendar.   For those cooks, presumably, who not only have more time on their hands than the librarycook does, but who also have a degree in civil engineering.

So gingerbread folk it would be.  And a few books.  Because, well, librarycook.  The dough itself was simple.  It had to rest in the fridge for an hour, allowing the librarycook a few chapters of The Binding – set in an imagined 19th century world where people’s troubles are bound into books, so that their minds are wiped clean, and the resultant books  are seen as salacious and seedy, and not mentioned in polite society.

The hour having passed quickly, the ginger folk had to emerge from the dough, and then they too needed a good lie-down in the cool of the fridge, before finally meeting the heat of the oven.  All in all, a good couple of hours of uninterrupted reading time.

The final touches were added the following day, when their personalities emerged with the addition of royal icing faces, clothing and other embellishments, producing a veritable village of ginger folk, along with a library of books, and a constellation of  stars. And very good they were too.

The librarycook wishes everyone a holiday break filled with books and reading, and of course, good food.  Happy Christmas! 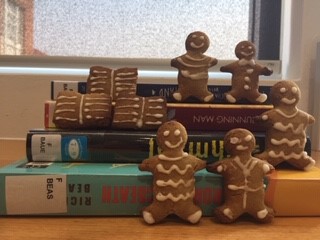