Sometimes the simplest things are the best.  Vegemite toast.  Black tea. Hot chips. A perfect mango.  And so, with that thought in mind, the librarycook turned to the July issue of Delicious, which had obviously had the same idea – eight pages of Mac ‘n’ Cheese gloriousness, with seven different recipes to choose from.

Which to choose?  Start simple, thought the librarycook.  And the 20-Minute Mac ‘n’ Cheese was hard to beat – although hardly meeting a key librarycook requirement, that there be plenty of reading time available – this recipe offered a mere 10 minutes of cooking time where no attention was required.

But it was good – and a notch up from basic, featuring oregano and Dijon mustard, alongside the carb-and cheese-laden richness of the pasta, Parmesan, Gruyere and mozzarella.

Which to cook next from the embarrassment of Mac ‘n’ Cheese (M ‘n’ C)  recipes proffered by Delicious?  The Lobster M ‘n’ C with Herb Butter?  Too much of a good thing, thought the librarycook.  How about the M ‘n’ C Lasagne then?  But why mess with a classic? The Chicken, Chive & Crème Fraîche M ‘n’ C, perhaps.  Or the Lamb & Rosemary Ragu with Pecorino Crumb?  No, thought the librarycook, who can spot the need to pad out an article a mile off.

So it came down to a choice between the Leek, Potato & Horseradish M ‘n’ C, or the Bacon, Chestnut and Sage with Sourdough Crumb.  Both looked good. But the librarycook finds it hard to go past a recipe including bacon, so that was it.

And again, not a lot of reading time – just 20 minutes, so only enough time for a chapter or two of Ben Aaronovitch’s October Man – like his Rivers of London series, set in the  magical police world, but this time featuring the German investigator Tobias Winter, and a magical crime set in the ancient city of Trier.

So how was this fancy M ‘n’ C version? It was OK.  Not great – replacing the buttermilk with regular milk would help, thought the librarycook, who has nothing against buttermilk in its place (Bill Grainger’s Lemon Souffle Pancakes, for example), but who found the overwhelming buttermilk tang just too much. 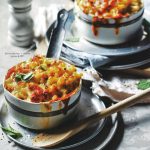 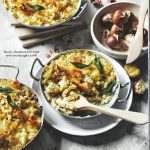