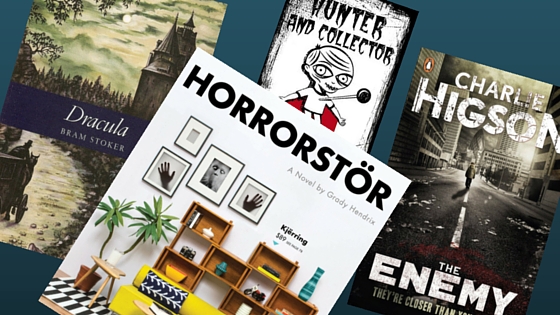 After finishing Horrorstör the other day, Mrs Klein remarked that although she doesn’t prefer the horror genre, she sure is surprised by how many horror stories she’s read.

Here is a selection of her favourites:

Victor Frankenstein is a scientist who creates a creature from parts of dead people. After the monster is rejected by Frankenstein, he seeks his revenge. Published in 1818, the story of this lonely and rejected creature still remains one of the saddest stories I have ever read.

First published in 1897, Dracula by Bram Stoker is where the ‘horror story’ really began. The story of a vampire with an insatiable thirst for blood- preferably by sucking it from the necks of young ladies.

Not really a horror story, but it is based on what is known about Vlad Tepes (Vlad the Impaler), the 15th century prince of Wallachia, known as Dracula. After reading this story, I have great sympathy for this man who was betrayed, imprisoned and tortured, yet managed to be a great ruler. It’s also a great story about the crusades and gives an insight into the mind of the man who inspired Bram Stoker’s Dracula. Lots of battles.

This is a world which has been taken over by creatures who farm humans for their meat. Their desire for human flesh is so strong that the people in these farms need to be kept under a dome during the night to prevent them from being eaten. Gene has lived incognito with these vampire-like creatures all his life but when reaches puberty, his smell becomes life threatening and he must escape. If you want to read something which is truly scary, then this is the book for you. ‘The prey’ is the first book in ‘The hunt’ trilogy.

Don’t be fooled into thinking this short story is for little kids. When the Alien (Mrs Hunter) chooses William, she thinks she has found the perfect prey. But not everything is as it seems.
Horrorstör : a novel
Grady Hendrix

If you’ve ever been lost in IKEA, you know how scary it can be. In Horrorstör, a group of people volunteer to stay overnight in the Orsk furniture superstore in Cleveland, Ohio where mysterious things have been happening during the night.

Yet another vampire story where the vampires have kept their true identities hidden. When 17-year-old Bella goes to live with her father in Forks, Washington, she meets a boy in her science class who appears to be repelled by her, but (surprise surprise), he’s hiding a dark secret. Read it to find out what makes Edward so attractive to girls, and why this novel went on to spawn the paranormal romance genre. But don’t watch the movie – it’s dreadful!