We’re always adding content to ClickView – mostly to support our teaching and learning, but there’s always room for a few just-for-fun programs too.

In April, for example, we added 29 new titles to the collection – some old, some new, but all of them worth a watch.

Documentaries were a strong category this month, with Norman Swan’s Invisible Wars taking the prize for most relevant to our times.  It’s an overview of pandemics in history and how we’ve dealt with them.  Brazen Hussies celebrates the legacy of the bold women of the Women’s Liberation Movement.  And Rise Up, a six-part series looks at the history of protest and its role in changing society.  Episodes cover the fall of the Berlin Wall, the anti-apartheid movement, France’s yellow vest movement,  the Arab Spring, the British miners’ strike of the early 80s, and the civil rights movement.  And with another episode still to be added, you could be inspired into a life of activism too.

But we’ve added some films too – the very recent Personal History of David Copperfield, written and directed by The Thick of It’s Armando Iannucci.  Less swearing, though, in this film!  The Oscar-winning film, Nomadland (best director, best actress, best picture), has just been added.  Can we strongly suggest you watch it on the biggest screen you have?  An iPhone isn’t going to do it justice.

Seberg is also new to ClickView – it’s a 2019 biopic about film star Jean Seberg and the destruction of her career by the FBI who disapproved of her activism in the civil rights movement.

The new series, Mare of Easttown, starring Kate Winslet as a detective in a gritty Pennsylvanian town has had rave reviews and is being added an episode at a time.

And for those who’d like a gentle, yet satirical return to the past, the ABC’s excellent The Games, a mockumentary set behind the scenes of the Sydney Olympic Games’ organisation is gold-medal worthy.  Episodes being added as they’re broadcast.  Less gentle, and even older, the horror cult classic Whatever Happened to Baby Jane? might be just the ticket as winter approaches. 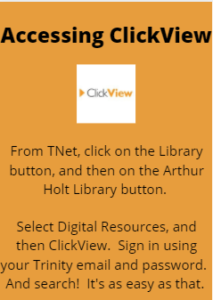 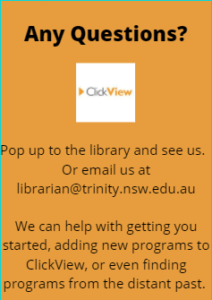 On this day in 1993, US lawyer #RuthBaderGinsburg

Arthur's Readers have taken up the mantle of boost

Who doesn't love dogs? This new book has already

Today we are celebrating National Aboriginal and T

The old adage, "You can't judge a book by its cove

Our #trinitygrammarschool students loved We Were L

Scenes from the #arthurholtlibrary balcony today.

We can't wait to read this new non-fiction book wh

It's Library and Information Week ! This year's t

On this day in 1997 the first issue of Japanese ma

The gang from Hawkins has arrived into the #arthur

When one of your Library team starts dressing like

As we head into the school holidays, make sure you

Need some reading inspiration for the winter holid

On this day in 1993, US lawyer #RuthBaderGinsburg was sworn in as an Associate Justice of the US Supreme Court. Ginsburg championed women's rights and dedicated her career to fighting gender inequality.
Ruth passed away in 2020. #trinitygrammarschool #RBG

On this day in 1945, the USA dropped an atomic bomb on Hiroshima in Japan. Almost 100,000 people died instantly and many hundreds of thousands more later from radiation.

On this day in 2017, French soccer club Paris Saint-Germain announced that they had signed popular Brazilian goal scorer, Neymar for more than 222 Million euro.

Head to the biography section to read Neymar's story